Few could have predicted Domingo Sanchez’s future success. The son of a Mexican immigrant family with 11 siblings, all living and working as migrant farmers in Kissimmee, Domingo could have easily allowed his circumstances to define him, but he did not. He was driven and determined to get an education and use his gifts and abilities and the Walt Disney Company helped him do it. At 16 he enrolled in a work-study program offered by Disney, and his deeply ingrained work ethic helped him excel at both his studies and his job and he soon caught the attention of George Kalagridis, then President of EPCOT. Under the mentorship of George, named President of Walt Disney World in 2013, Domingo gained confidence, experienced satisfaction in his work and eventually found his calling in real estate.

Years in business as a real estate agent and work under a developer led Domingo to success, but he wanted more education so he returned to college at Valencia and there he met another person who would change his life, Thomasa Tompkins, whose father, Tommy, was a home building legend. Domingo and Thomasa would marry and have a daughter, Skylar, and devote themselves to serving others through various charitable endeavors, including the McCormick Research Institute, providing equine-assisted therapies for those in need.

As the real estate work grew, and with guidance and direction from his father-in-law Tommy and another mentor Ken Dixon, Domingo started Titan Management in 2005. Titan Management expanded to include Titan HOA Management LLC, providing HOA management throughout the state, and Titan Land Company, LLC, a real estate development company that specializes in mid-size apartment communities. From the early days until now, ShuffieldLowman's Jim Basque was there all along in Domingo’s words, “as a good friend and a good lawyer.”

Recently Domingo, with help from Jim Basque, closed an $18 million deal in the Miami HUD office that will finance Portofino at Champions Gate, a 120-unit luxury apartment community. Offering upscale amenities such as direct-access garages, granite, gas appliances and barrel tile roofs, the community is well under way and will start pre-sales in the Fall, with a grand opening targeted for Spring of 2017. Domingo and partners have also worked with Jim to develop Vista del Sol and Tierra Pointe, each a 74-unit, active adult affordable apartment community in Osceola County.

In addition to his businesses and charitable endeavors, Domingo enjoys his work on the Board of the Greater Orlando Aviation Authority, a position he was appointed to by Governor Rick Scott. As a Board member, he headed-up an initiative to improve customer service at the airport and is currently working to improve the TSA experience for customers….something we can all appreciate. 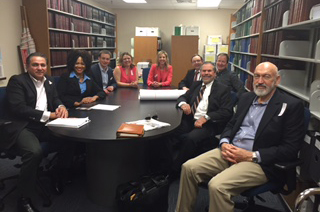